MARBELLA – In june the Marbella Dutch Business Club (MDBC) organized the sixteenth Haring Party. Almost 250 people attended the event that has been famous for many years under the Dutch-language jet set on the southern Spanish coast. Welex, your law firm in Marbella, was also present. Not only as a guest, but also as a sponsor of the event.

Everyone was nicely dressed and especially the ladies with their beautiful hats, ornaments and beautiful outfits stood out. The guests came together in Chiringuito Ibiza, next to the famous Sea Grill restaurant. Both belong to the sophisticated Puente Romano Hotel on the ‘Golden Mile’ of Marbella. Waiters walked through the festively decorated top location and served the most delicious snacks, although the fresh ‘Hollandse Nieuwe’ by Schmidt Zeevis from Rotterdam naturally received the most attention. Guests regularly had to wait in line to receive a tasty, freshly served herring. Sushi, wild salmon, eel, caviar and oysters were also served.

To get the enthusiastic networking guests on the dance floor, singer Ger Vos gave a spectacular performance for the third year in a row. He was accompanied by Lisa Michels Together the artists created a top atmosphere.

Just like other years, this year the Golden Herring Award was awarded to a Dutch person who made a special effort in southern Spain to promote the Netherlands’ good name in Spanish society. Last year, Marijke de Nier from Residencia Estates went home with the beautiful statue and this year Elvire Boitelle was awarded the honorable prize. She received it because of her many years of silent power behind the board of the Marbella Dutch Business Club.

The most beautiful hat

Another tradition is the awarding of the prize for the most beautiful hat. This year it went to Mendy Riemslag. She won a fully catered weekend for two people in Puente Romano. 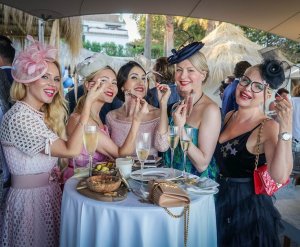 Every year the MDBC supports a good cause. The past two years it was the organization Free a Girl and this year the Debra foundation was chosen. This is a Spanish organization that offers help to ‘Butterfly Children’. They suffer from Epidermolysis Bullosa, a hereditary and until now incurable skin condition that causes blisters on the skin spontaneously. Due to the tenderness of the skin of patients, this disease is also known as ‘butterfly disease’. Almost every month a child is born with this condition in Spain. Debra offers direct assistance to patients and their parents, provides information to doctors and supports research into the disease.

Who hadn’t had enough of the party at 11 pm could still go to the great Afterparty where a DJ played great swing music until midnight and the bartenders mixed special drinks.

03, 07, 2019|Tourism and Culture in Spain|
facebooktwitterlinkedinpinterest